on October 12, 2009
So, remember those bifold doors we turned into little french doors..? I told you about them a couple of weeks ago...? (See here, if you don't remember.) Well, we finally got the knobs, and I think they're lovely. Take a look: 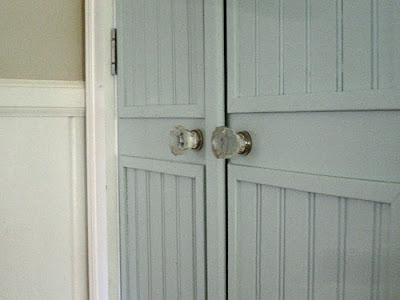 They add the perfect finishing touch to the doors, don't you think..? 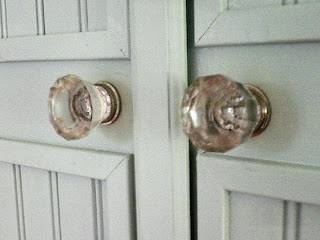 What I neglected to tell you in my earlier post is that, while doing the work, we had a little, uh... accident. I forget how it started. In a really silly way, most likely. It was probably one of those "We can't do it - it'll look dumb/ Of course we can do it - fine I'll do it all by myself!!" moments...

And so it was that I found myself wrestling with the bifold, trying to take it down all on my own... And I succeeded - only it landed squarely on the thermostat. Sigh.

Bill quickly put aside our little spat (and suppressed some serious laughter, I'm sure), coming to the rescue since I was caught in one of those I-almost-saved-it-but-didn't-quite-pull-it-off positions, awkwardly holding the door which had caught my ankle at one end and smashed the thermostat at the other. He gently assured me that it wasn't a big deal and helped me untangle myself free from the door, while I just berated myself for being so stubborn. (I think I was probably a little embarrassed, too, not just angry. Heh.)

The one cool thing about this little episode was that when we took the old (really old) thermostat down, we found one of those sweet surprises old houses can give you: 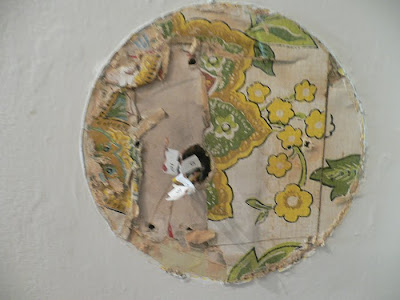 Isn't that tiny bit of vintage wallpaper the sweetest..? I love it when little unexpected things like these happen. Anyway, I debated whether I should take it down and frame it or not, but I decided to leave it with the house, so that it can tell this story again through someone else some day.

So, we covered the little treasure, with Bill doing most of the work, and me getting in his way, trying to document it... 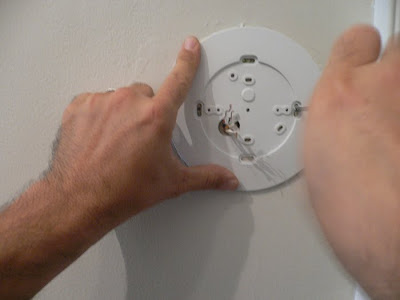 And there you have it. The same exact thermostat, sadly made out of plastic instead of metal...but, oh well. At least it's white, rather than brass. I guess that's an improvement, visually speaking. For me, anyway. 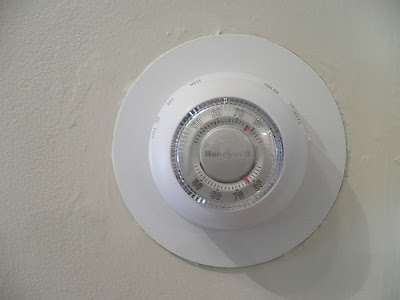 Thanks for taking the time to comment. Know that I appreciate your thoughts, even if I may not always get the chance to reply. Thanks again! 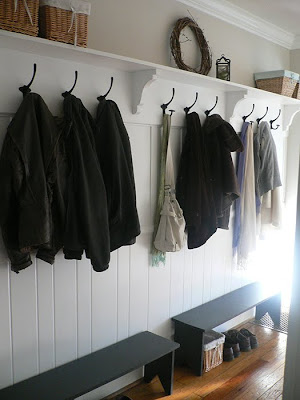 Remember I told you about adding brackets and a shelf, along with hooks, to the wall in the hallway? Here's the picture to jog your memory: Anyway. What I didn't show you was that next to the shelf and benches, right out of sight in the photo, are two closet doors where we hide all manner of household odds and ends: paint cans and rollers, drills, random screws and nails, hammers, cleaning supplies, stacks of toilet paper (Bill thinks I have a problem hoarding paper goods), boxes of movies in VHS that belong to Bill (I think Bill has a problem hoarding everything, but nevermindthat), the odd box of old clothes that don't fit Noah anymore (but we'll take to the Goodwill - eventually)... in other words, this space holds a lot of our stuff. But it's stuff that needs to be in a closet, behind closed doors, at least until we get around to using it or appropriately disposing of it. So back to the point of this post. Those closet doors in question? Horrid bifold little 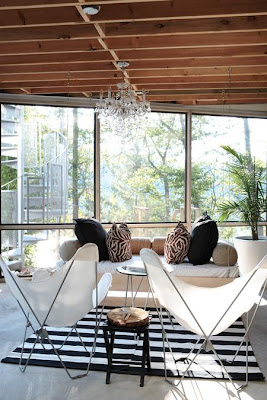 The good news is: there are options. There are beamed ceilings - in modern and eclectic living spaces, in rustic kitchens, and farmhouse bedrooms; there are whitewashed beams, and beams that are best painted white, and just plain old, beautiful, chunky beams... There are painted ceilings, sometimes to match crown molding colors, sometimes to mimic the sky, or even sometimes to create rich, dramatic interiors... There are vaulted ceilings painted white and paired with white walls to create a beautiful sense of volume and tranquility, or juxtaposed with wallpapered walls to emphasize the shape of the room and create a feeling of playfulness.... There are ceilings covered in beadboard, sometimes painted in creamy shades and laid out in interesting patterns... There are ceilings covered in old tin tile, which can be left old and flaky, or can be painted thoroughly before and after installing it if one should be worried about lead paint (heh), Th 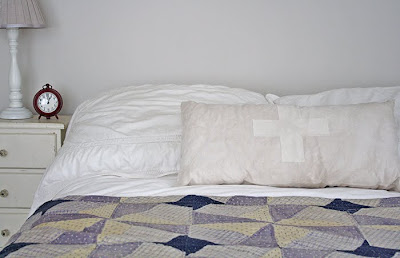 Remember this post ..? Well, I ordered this handmade pillow from Liane at enhabiten ... I think it's the perfect companion for our quilt in the spare bedroom, don't you? They're calling for snow here today... I know most of you are about done with winter by now, but it doesn't snow much around here, so I'm actually kind of excited. Maybe we'll get to do this again tomorrow: Now, that would be fun, no? Have a wonderful weekend, everyone!